A letter from Dawn and Jake:

Cincinnati’s Ronald McDonald House means so much to our family. We will forever be deeply grateful to the House and what they did and continue to do for our family. Here is our story.

During our second pregnancy, I carried identical twin girls to 36 weeks, 6 days gestation. We made it 12 hours shy of our 37-week goal, which is considered full term for twins. Delivery was quick and smooth at our local community hospital. The girls were perfect in every way and did amazing after delivery. Forty eight hours after delivery, we were all discharged home and were doing well. However, at ten days old, we were notified that their newborn screen came back positive for cystic fibrosis. They are identical so they both have the same genetic mutations and the screening  detected two mutations, confirming the diagnosis without even needing further testing. Both of our sweet beautiful girls have cystic fibrosis. We were immediately referred to a CF clinic and began all the normal protocols.

Life was a blur but things were going ok until they both got sick. At ten weeks old, Ashlyn was admitted to the hospital. This was the first of many admissions last year. She was admitted the most, but Emmalyn had her share of struggles too and ended up admitted at times also. Between the two girls, we were admitted as inpatients 116 days total in 2018. Both ended up having major surgery, Ashlyn spent 48 hours on a vent, both had G tubes placed, several times they were very sick and scared us that they might not make it to their first birthday. 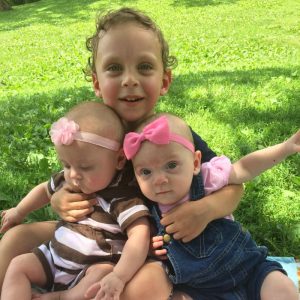 Between my husband and I, one of us was always at the girls’ bedside. And especially when they were very ill, we both wanted/needed to be close. Our home was an hour and a half away from that hospital and when our girls were sick, that was too far away. It was also important to us to still be a parent for our son Sully who was 3 1/2 when Ashlyn got admitted the first time. We didn’t want him to feel like we had dropped him off at a friend’s house and forgot about him.

Staying at the Ronald McDonald House allowed our family to stay together. It allowed us to be parents for all three of our kids. It allowed us all to be close when one of the girls was not doing well. It allowed my husband and I to help each other. Many times, one stayed with one daughter in her inpatient room while the other would take the other daughter to a different part of the hospital for outpatient testing or appointments. And our son could spend time with both of us through it all.

For a variety of reasons, we transferred our daughters care to Cincinnati Children’s at the end of 2018. For a normal person, the drive from our house to Cincinnati is three to three and a half hours. For us, with twin babies who both have medical issues, the trip usually takes four to six hours. The doctors at Cincinnati Children’s have done wonderful things to help our girls. They are both doing better and we know it is because of the care they have received recently. We also know it would not be possible for us to get medical treatment this far away without the help of the Ronald McDonald House. Both girls need multiple aerosol treatments and shaker vest treatments twice daily. We have been coming down the day before our appointments and staying at the Ronald McDonald House. This allows us to travel during the afternoon and then still do evening treatments per our normal routine. We can get a decent night’s sleep and have time to do morning treatments before our appointments.

By being able to come back to the Ronald McDonald House after a long day of appointments means we can get a good meal and keep on our normal routine for evening treatments. We get some sleep, get up the next day, do morning treatments and then head home late morning.

We know that we would not be able to come this far and receive the best care for our girls without the wonderful people who support Cincinnati’s Ronald McDonald House. We are forever grateful and will always hold a special place in our hearts for RMHC. THANK YOU.