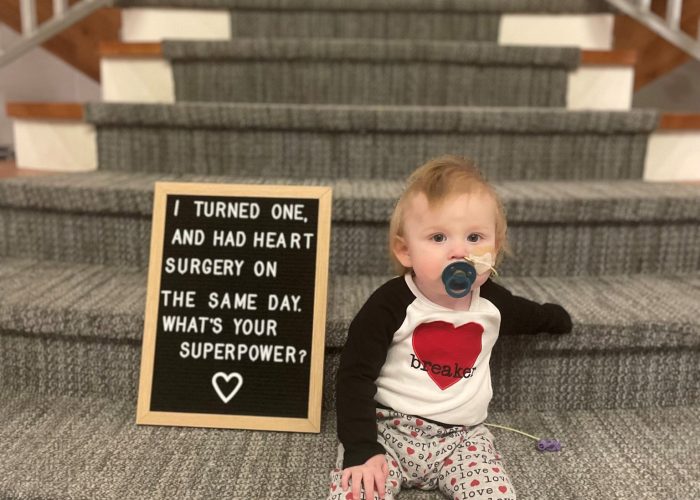 “Ronald McDonald House has been so good to us and we are so thankful that both times we needed to stay we were able to stay! Aberson’s first birthday is tomorrow and the poor little guy has to have a permanent pacemaker placed, the gift that will keep giving.” -Krista, Aberson’s mom

Krista, Aberson’s mom shared their journey and how you help them get the care their son needs:

“Aberson’s story started when Todd and I found out I was pregnant. I was referred to High Risk MFM services because I’m a Type 1 Diabetic. This was a usual thing for us during pregnancy. During the anatomy scan, the ultrasounds tech said she needed to get the doctor and she would be back. The doctor came in and finished my ultrasound. She said that our baby boy has Tetralogy of Fallot (TOF). I was very scared.

She referred us to see a fetal cardiologist four weeks later -the longest four weeks ever. At the follow-up with the fetal cardiologist, we got a completely different diagnoses for our little guy. That diagnosis changed the next time we followed-up with the cardiologist. Given the possibility of a complex cardiac repair, our care was changed to the University of Cincinnati for High-Risk OB and Cincinnati Children’s for cardiology. Here, were received our final diagnosis for Aberson’s heart: L-transposition of the great vessels, with large VSD, and coarctation of the aorta. The severity was not to be known until after delivery, however.

Aberson was born on 1/31/21 at University of Cincinnati at 12:00 a.m. exactly. After a short time with mom, he was taken first to the NICU and then transferred to Cincinnati Children’s CICU. We found out that Aberson had two urology defects which will require surgical repair in the future.

We checked into the Ronald McDonald House just after he was admitted to CICU. Aberson had his first surgery at eight days old. He was in the CICU until Feb 13, 2021 then was moved to the step down unit. While in the step down unit he developed a blood clot in the leg due. He also developed liver issues. Aberson was discharged from the hospital on March 4th 2021 and stayed at the Ronald McDonald House until his first post-surgery follow up on March 9.

March 9th was defiantly a bitter sweet day for us.

March 9 is my birthday, the day we got to take Aberson home to meet his four big brothers for the first time and also was the day my great grandmother passed away. She was 104 years old and lived with us.

Aberson needed to be fed with a feeding tube with a pump for many months after the first surgery. We returned to Cincinnati for his second major heart surgery: a double-switch, with VSD repair. Doctors even had to move his coronary arteries! This surgery is not common, so Aberson was in the OR for 17.5 hours, much of that on bypass.

Unfortunately, Aberson developed complete heart block during the surgery. He had to return to the OR on his first birthday to get an expensive new present, a permanent pacemaker! We got to be in the new CICU at Cincinnati Children’s but have also returned to Ronald McDonald House.

We can’t say enough how much Cincinnati’s Ronald McDonald House has meant for us during both of these stressful times. We were inspired to both donate to the House and do some fundraising as well.”