Our House Response to COVID-19.

Laney celebrated her third birthday in January 2019. She was a typical, healthy child. However, on February 23, her mom, Michelle, received a call to come home because Laney was very sick and vomiting. Michelle took her into the hospital. Doctors ran many tests but every test came back negative. They sent Laney home. When she was still so sick the next day, her family took her to another hospital only to be sent home once again. After another day came and Laney was still sick, Michelle took her to another hospital in Pikeville, KY. Doctors retested her for everything and also did a blood test. When the results were in, doctors came into the room and said they suspected cancer. Laney’s white blood cell count should have been around 12,000. Hers was 376,000. In fact, doctors didn’t know how Laney was alive or why she wasn’t seizing in her brain. They wanted her to be immediately admitted to the University of Kentucky hospital two hours away.

Once there, doctors performed more tests and confirmed Laney’s cancer diagnosis. Laney had AML, a rare form of leukemia. To save her life, Laney needed a bone marrow transplant under the expert care of specialists in Cincinnati. 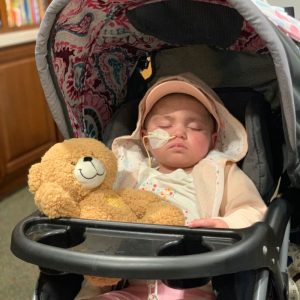 Laney was admitted to Cincinnati Children’s in May and has only been out of the hospital for 12 days since then. Her transplant went well but was not without complications including a rash from an allergic reaction to the chemotherapy she was taking.

As Laney healed in the hospital, her family was just steps away with a room at our House. And now that she is finally strong enough to finish recovering here, her family rests easier knowing they are so close to the hospital if they need to get her there quickly.

“The Ronald McDonald House has been very helpful and a huge benefit to us while here in Cincinnati. Laney loved getting passes to come to the House and now she is able to stay with us while she gets better. She’s in isolation so she plays in our room mostly. She got a toy from the toy closet that she absolutely loves. She plays with it four or five times a day. When you get here, you don’t feel so rare because there are other families dealing with what you’re dealing with. We talk about each other’s children with each other. Being in the House means that we have the freedom to go and do things like see the fish or play in a playroom without going outside.” For a child who is immune-suppressed, that’s a wonderful gift.

On the day Laney’s family expected to get the good news that she was well enough to go home, they were surprised and devastated to learn that her cancer had returned. Laney will need another transplant and must begin the process all over again. While they take on this journey for a second time, we will be here for them.

Your support will help families like Laney’s stay together during the most difficult time in their lives. Thank you for being the reason they have each other.