“No distance is too great to save your child.”

Dion, an army veteran who served five tours in Iraq, never thought he would be watching his son battle for his life for the third time. But that’s his current situation. He and his wife, Angela, left home in Kentucky to get Matthew the best care with the medical team in Cincinnati. This is their story.

In August 2016, Matthew was swimming in an indoor pool, having fun like a typical 12-year-old boy. After several hours, he got out of the water and his parents noticed a lump on his neck. His parents were worried and took him to the emergency room. Unsure of what was going on, doctors ordered blood work. The results came back as T Cell ALL, a form of leukemia. Matthew was immediately sent to the hospital for a two-week stay.

He handled chemo well and was in remission a few months later. He was excited to go to see his older brother in Alaska over Christmas. Before he left, he went for his routine scans and tests. While he was gone, doctors called to say that his cancer was back. Dion and Angela waited until after Matthew’s trip  to break the news. He would need treatment to get his cancer into remission again and then he would need a bone marrow transplant.

In January 2017, Matthew’s family learned that they were not strong enough matches to be donor to Matthew. Thanks to the national bone marrow registry, however, a nearly perfect match was found a few hundred miles away. When his cancer was finally in remission, Matthew was transferred to Cincinnati Children’s to begin the process to receive his bone marrow transplant.

Matthew received his transplant on February 23, 2017. The first few weeks after were a roller coaster. Several complications nearly cost him his life and he became very depressed to be away from his family and isolated in the hospital. Finally, in April, he got a day pass to come over and visit our House and see the room he would soon be discharged to with his parents. Instantly his mood switched. He wanted to be in our House because that meant he was healthy enough to be out of the hospital and that he could get some uninterrupted sleep. When he was discharged to our House, he enjoyed the activities and being around other people who knew what he was going through.

In June 2017, Matthew was able to go home. He met Billy, his bone marrow donor, and they became instant friends. Matthew learned that the donor was a student at Penn State. One day when he was running late for class, he saw a booth for Be the Match donor registry and stopped to donate so he could give his professor a great excuse for why he was late to class. Little did he know that one month later, his tardiness to class would allow him to help save a young boy’s life.

In December 2018, what Matthew hoped was just a simple cold turned into so much more. His cancer was back again. This time, it was a very rare form of leukemia called Mpal, which accounts for just 3% of leukemia cases. Matthew would again need to get his cancer in remission and undergo another bone marrow transplant. 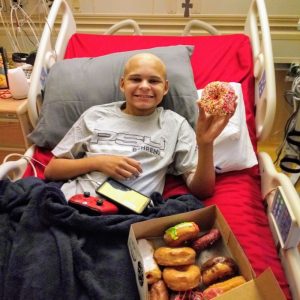 Billy was ready to donate to Matthew again, but doctors wanted to find a potential back up in case he needed it. This time, they were able to find a PERFECT match, and they didn’t even have to look very far to find it. It was Billy’s twin brother, Joe, who had signed up to be a donor after seeing the difference his brother had made in Matthew’s life.

Joe donated his marrow on April 23, 2019. This time around there have been no complications and Matthew is doing very well. In fact, normally kids are able to leave the hospital and stay in our House around day +45 or 50 but his counts were already that great by day +20! Great news for Matthew! He is currently here until the end of July, waiting for his 100-day mark.

Now a veteran guest of our House, Matthew loves the activities and meeting other kids. He has been studying hard and will graduate a year early from high school- a testament to his determination and strength.

“The House gives families complete peace of mind and stress relief. You get a sense of family here and know that you aren’t alone in this fight. If Ronald McDonald House wasn’t here, we would all be in hotels. We became friends with a mom who is here alone while her child has a bone marrow transplant. Without this House, she would be alone in a hotel surrounded by strangers. Imagine being here by yourself like that – you are truly alone. But not at Ronald McDonald House. The staff knows why we are all here and help us. We have each other here.”

So far, Matthew has spent a total of 240 nights in our House and still has some time left to finish recovering. With your help, kids like Matthew have a place to look forward to staying while they finish recovering for many weeks, months, or even years. You can make a difference today!