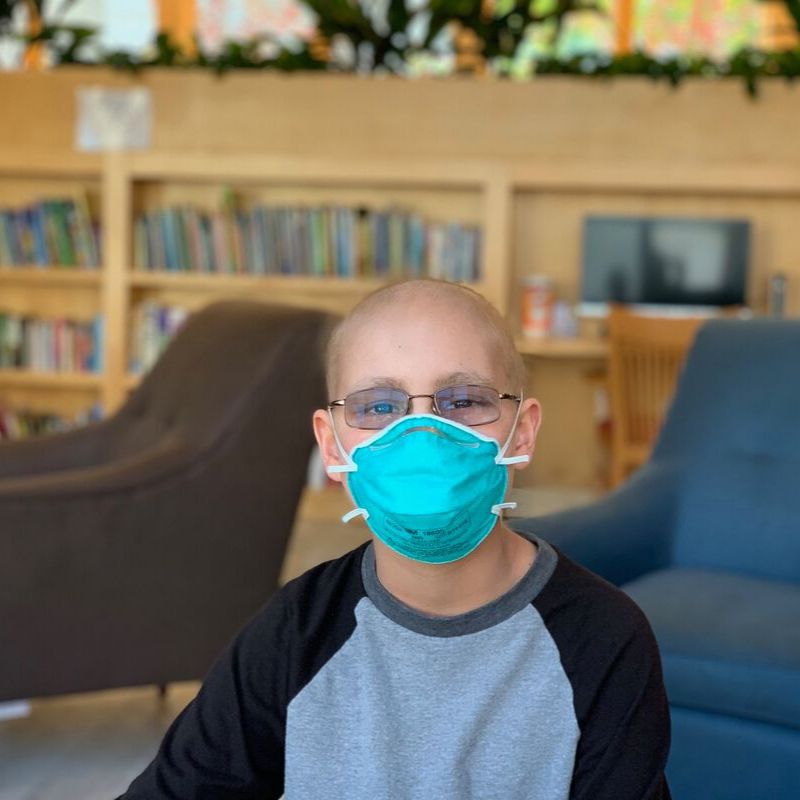 At age four, Dylan ran a fever for over a week but he just wasn’t kicking it. A visit to the pediatrician led doctors to do some bloodwork. They discovered that Dylan’s platelets were low and sent him to a local hematology group in their hometown of Baltimore. After a few months, Dylan’s counts were not going up, so specialists suggested a chromosome breakage test which led to his diagnosis of Fanconi Anemia.

Having learned of his Fanconi Anemia (FA) diagnosis Dylan and his family headed to NIH and participated in a study for a week of evaluation and testing. They learned more details about FA, Dylan’s specific type (one of 23 genes identified to date) and also learned that Cincinnati Children’s was one of three centers nationwide that are known to have the expertise for FA.

Dylan’s family and doctors monitored his health for several years while his blood counts slowly stair-stepped down. Each flu season, he set a new, lower plateau for his blood counts. He got pneumonia in November of 2017, the week of his birthday, and his counts dropped into a critical range. Then, fortunately, they bounced back up the upper edge of transplant range on their own. They decided it was time to think seriously about a bone marrow transplant. His parents toured all three centers and they were most comfortable with Cincinnati.

At age 11, Dylan came to Cincinnati for several nights to do his pre-transplant evaluation. While in town, they stayed in a short-term room in our House. Dylan had a week off, went home and did summer activities…rode bikes, went to the pool, hung out with friends, came back, got his central line and was admitted for his transplant. His family got a room in our House shortly after.

“I understood what transplant was but not really what was going to happen to me because they told me all of the things that could happen, but I didn’t know how my body was going to react to this.” – Dylan

When they got the FA diagnosis the family was tested for FA and also for potential to be a bone marrow donors. Dylan’s eight year old brother, Colin, was a match! Cell day was July 25th, 2019. Colin’s donation process went ok. He had a kink in his central line in his neck so it had to get adjusted prior to donation and that was very painful for him. But he did really well and he slept through a lot of his donation. Dylan’s transplant was a peripheral stem cell transplant. This was a less invasive transplant process for Colin and allowed for greater separation of potentially dangerous blood components by the medical team before they were then infused into Dylan. Dylan said, “Also, when I was going through chemo I didn’t lose all of my hair. That’s why I still have some!”

He was still in public school before he came here. Despite struggling in November with low blood counts, Dylan bounced back was able to finish fifth grade in his school. Since he had a donor, he had some flexibility with scheduling his transplant.

Dylan is keeping up with 6th grade through teachers at Cincinnati Children’s as well as online classes through his home school district. His goal is to get back to school before the end of the year, hopefully around spring break as long as he is medically cleared.

Before heading to Cincinnati, Dylan explained his situation to a few friends and teachers. “I think they understood what was happening. They asked questions and I answered them.”

Dylan has gone through so much at such a young age. When describing his experience, he said, “You’re in the hospital for a long time. You can’t do a lot of things, you can’t swim because of your port and you can’t get it wet (so it has to get covered every time I shower). It makes me feel cut off from my friends a little since I don’t get to see them. Some of them forgot to keep up with me.” – Dylan

While he waits for the magic “+100 days” to get the news that he can return home to Maryland, Dylan participates in activities around our House when he can. He loves seeing the therapy dogs, and their upcoming visits have helped him through times when he wasn’t feeling so great. He also relied on the support of friends and talking to them to help him. Recently, watching the demolition of the back patio and concrete parking area have been good entertainment.

“I’m looking forward to my room, my brother, my basement and my x box, and going on a bike ride! People who donate make happiness happen. They help people who can’t go back home because of their condition. If feels sad to be far from home.” – Dylan

His family wanted to share this: “The staff, facility and location are all helpful. Super convenient to get to the hospital. There are some regular volunteers you see out there every day. They help make the place run, and you notice when they aren’t there, too. Volunteers and staff really do a great job. We appreciate the work they are doing.”

Thank you for giving Dylan and his family a place to call “home”while they are far from their own.