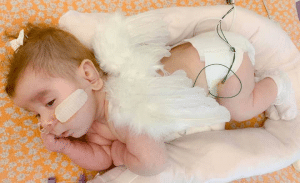 Emmy has been fighting for her life since before she was born. She has a condition known as congenital diaphragmatic hernia (CDH). The left side of her diaphragm never formed in utero, so her organs that would normally be lower in her body moved into her chest, compromising her lungs and heart. When she was born, she had a very small right lung, virtually no left lung and her heart was shifted to the right and she had severe pulmonary hypertension.

When Shanna and Jeremie learned about this while Shanna was still pregnant, doctors in their hometown of Massillon, Ohio referred them to specialists in Cincinnati to give their daughter a chance to survive. Emmy has needed extensive medical care from the moment she was born. And while she receives that care, her parents were never more than a few steps away, especially since they lived in a room at our House. Shanna shared their experience with us:

Just when life couldn’t get any more stressful fort Shanna and Jeremie, Covid-19 began to spread around the world. To minimize the risk of exposure, they were unable to leave the Cincinnati area and remained isolated from their friends and family while Emmy continued her fight to survive.

“The virus has definitely made our time here lonely. Thankfully, we have each other, but not being able to have our extended support system has been rough. We would love for Emmy’s extended family to meet her and cannot wait for the day they can. But that is a necessary consequence of the times and we understand.”

For Shanna and Jeremie, times were difficult, but they felt the support of perfect strangers by staying in our House. The donations from people they had never met filled them with gratitude.

“The donations are the reason the House is able to operate so, to our family, they mean the world. As we said before, the House is the reason we can be with our daughter on a daily basis, and we can never put into words how much being able to be here means to us.”

Their lives were full of change and uncertainty before the pandemic and remain that way. However, they found hope in one thing that has remained the only constant in their lives: our House.

“When we arrived in Cincinnati and our daughter was born, our world became chaotic. Every day was different. We never knew what it would bring. For the first few months of Emmy’s life, we were never sure how events would play out and we were exhausted all the time. During that time, and now, we had one constant, stable thing: We knew that we had a place to sleep, to grab a bite to eat and to escape for a moment if we needed it. We had a place to recharge. Ronald McDonald House was that place. We are forever grateful to the donors, volunteers and employees that made this possible for us.” 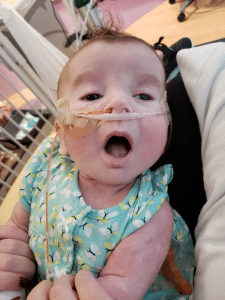 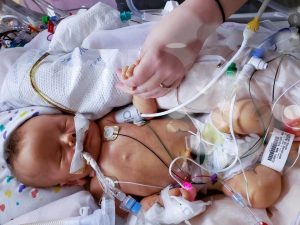