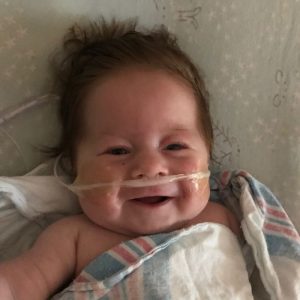 Christina and Nathan were excited to add another member to their family of five! However, the 20 week anatomy scan revealed devastating news. Doctors found out that their unborn son had congenital diaphragmatic hernia, meaning that the muscle that separates the chest from the abdomen failed to close during development and several vital organs had moved up into his chest. Doctors explained that he would need expert care from specialists in Cincinnati to repair this life-threatening issue.

They traveled from their home in Fort Wayne, IN for a full day of appointments in April of 2019. They learned that Christina would need to relocate to Cincinnati in June in order to be close to the care that her baby boy would need when he was born. Doctors also suggested that they prepare to be in Cincinnati for three to six months at least.

During this time, Christina and her family were living in a hotel for almost a month. During Jackson’s repair surgery, they received a call from Ronald McDonald House offering them a room. For him to come out of surgery, be stable and then to get to check into RMH was a huge sigh of relief for this family.

“It was very emotional because we couldn’t have everybody together for a while, but the travel back and forth with the kids was hard. Eventually getting in here was great for all of us. The kids had things to do and then it was just a walk over to the hospital to see baby brother. They spent the summer here and then they come on weekends now while school is back in session. They LOVE the toy rooms. They go from toy room to toy room. The game room is the best. My daughter loves the craft room. Just she and I will go there so it’s good. She sits and tinkers. The boys pick out movies. It’s so helpful.”

Jackson was doing well and there was talk about sending him home. However, he had some complications and needed another major surgery in September. After this six-hour surgery, he is now back in the recovery phase. He may need a heart repair surgery, but doctors are hoping this can come later on for Jackson. While he continues to receive treatment, his family can stay right next door in a room at our House.

Christina had this to say about their stay with us:

“The kids just love Jackson. My oldest is just smitten by him. We couldn’t get him to do his summer reading list, all summer, except to read to Jackson. We’ve had some bumps in the road with kids processing things and they just want everyone home.

The House was an unexpected blessing. We just wanted a room by the hospital. We didn’t know about the food or the snack cart. From being in the hotel, travel back and forth from the hotel here and trying to get food for everyone was going to eat us alive – financially and emotionally. We didn’t know that meals were made for us and they are so well-balanced, etc. that was a life-changer. When the kids are here, we eat together and make a big thing of it. I’ve gone home just a few times and once on a Saturday. While there, they said we have to have brunch because that’s what we have at Ronald McDonald House!

This House relieves the burden from our family. Nobody asks us for anything. It’s the extra things you give us to help that are huge. The unexpected things like the food and even relieving mom guilt. All summer, I couldn’t do what I normally do with my kids. But we got zoo tickets and aquarium tickets and they were so happy to be doing something. All of that ties in with relieving so much stress when we’re already stressed with that’s going on.” 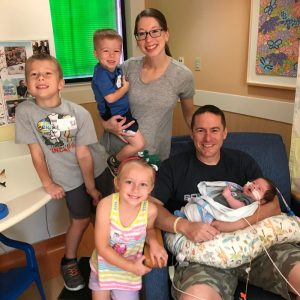 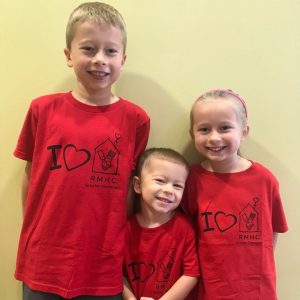