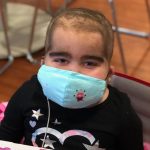 May 19th, 2018. That was the day that Ember left her home in Warsaw, Kentucky to meet with doctors at Cincinnati Children’s. Little did her family know it would be 263 days before they would be able to return home. Just two weeks before, Ember’s grandmother, Tina, noticed excessive bruising on Ember’s legs. She knew Ember liked to play and climb, but this was bad. She sent pictures to the doctor and they wanted to see Ember within the next few days.

During her appointment, Ember underwent various blood tests to figure out what was causing this. Shortly after, doctors called with devastating news: Ember was very sick and needed expert care at Cincinnati Children’s as soon as possible. They drove to Cincinnati expecting only to be there for a few days, until they learned that Ember had a blood disorder called aplastic anemia. She needed a bone marrow transplant to save her life. Luckily, an international donor came through as a match and her transplant was a success.

While she was recovering, Ember was allowed to visit her family in their room in our House for a few hours at a time. While in our House, she didn’t want to go back to the hospital because she was having too much fun! Finally, on December 27, as the hospital hallways were lined with nurses, doctors, staff and families waving goodbye to Ember, she was able to leave the hospital to finish recovering in our House! The first night with us, she hardly slept. She was waiting for the beeping monitors, the interruptions from nurses and the noises and the rounds to happen – but those never came. Peace and quiet had returned and now Ember could sleep soundly. 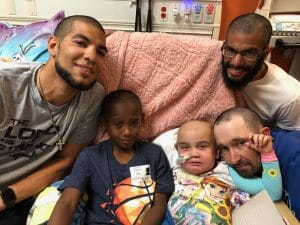 It was stressful not being home, but because her entire family could be with Ember, it made life easier. In fact, as her hair began to fall out, her family decided to shave their heads in support. From her first day in the hospital to her last days at our House, Ember’s family was just steps away from her and could surround her with support when she needed it. After 182 nights living in our House, Ember was finally able to go home! Tina explained:

“When I needed something, you guys were there. From the littlest things to the biggest things, you make it feel like home. It is so rewarding to be here. The House takes off a lot of stress. If you’re hungry, there is always food or leftovers or a chef to help you. If you don’t have a vehicle and need to go out, they will take you.”

Thank you for helping our House feel like “home” for children like Ember so they can recover surrounded by the support they need.